“The Cigare Réserves are also like Benjamin Button, getting younger as they get older.”
– Winemaker & President-for-Life Randall Grahm

Winemaking, like life, is a bit of a dream. One imagined (some years ago) that one might produce a sort of hommage to Châneauneuf-du-Pape, a Rhônish-style blend in California, and somehow, miraculously, the wine materialized in this terrestrial sphere; it has been, in balance, a more or less viable, ongoing proposition. 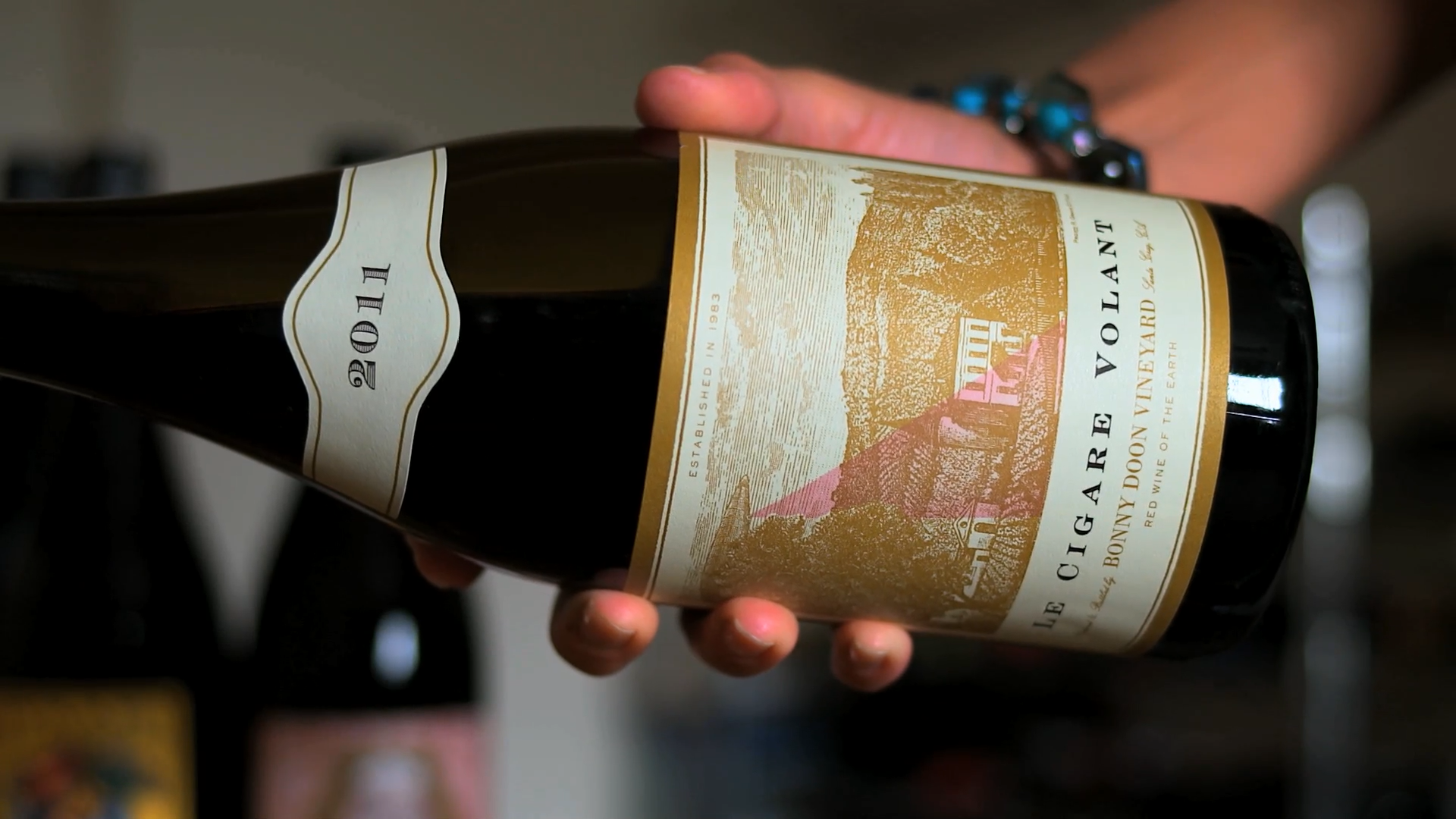 By 1984 the idea had entered my brain that calling a wine ‘Vin Rouge’ might not be the most compelling sales proposition, and that if I wanted people to actually buy the wines, I might think about giving them some sort of conceptual hook, or at least a stylistic referent. It’s important to remember that, when I started working with Rhône grapes, they were essentially an unknown commodity in the United States. It was clear that I would have to do something outlandish, even outré, with the packaging (a practice that is now commonplace) to draw attention to the wine, because labeling it straight would be equivalent to printing the labels with disappearing ink… So, perhaps a blended wine that was not such an arrant mongrel would be a more successful sales proposition than a Vin Rouge, tout court. Why not contrive to make a California Châteauneuf-du-Pape, or at least an hommage to one?

I was in business; it remained only to find a catchy name…  I had been hanging around Kermit Lynch’s tiny wineshop, then located in Albany, near Berkeley, soaking up his enthusiasm for the great wines of the Rhône, and thought: Why not spoof Vieux Télé-graphe, a classic Châteauneuf? I imagined a label that looked like an old telegram with strips of paper (the message) seemingly glued to the telegram itself. I wasn’t sure exactly how the copy would read but loved the idea of using the word stop in lieu of a period. (I vaguely recalled a Marx Brothers routine using telegramese to set up a joke.)

We had already fermented the grapes in 1984 when I picked up a copy of John Livingstone-Learmouth’s The Wines of the Rhône and leafed through the chapter on Châteauneuf. (If I was going to make wine in this style, a little education was in order.) There I learned about the bizarre local French ordinance prohibiting the landing of flying saucers and “flying cigars” in these Rhône vineyards, and I was utterly charmed. Perhaps a label that treated this goofy ordinance would be a broader, more inclusive joke than a spoof of Vieux Télégraphe, a wine that was then known essentially only to wine geeks, and the aim, of course, was to educate the American public about the virtues of this largely unknown category, the wines of the Rhône.

The problem when you try to make a reference to an Old World style using Old World language on a New World product is that you typically come off as being derivative and pretentious, as is evident in all the Châteaux Quelque-chose and Domaines de N’importe-quoi of Napa Valley. With Le Cigare Volant, a certain ironic distance was perfectly established—the wine bears a relationship to the French product but also maintains an appropriate separation. Oh, those wacky French. 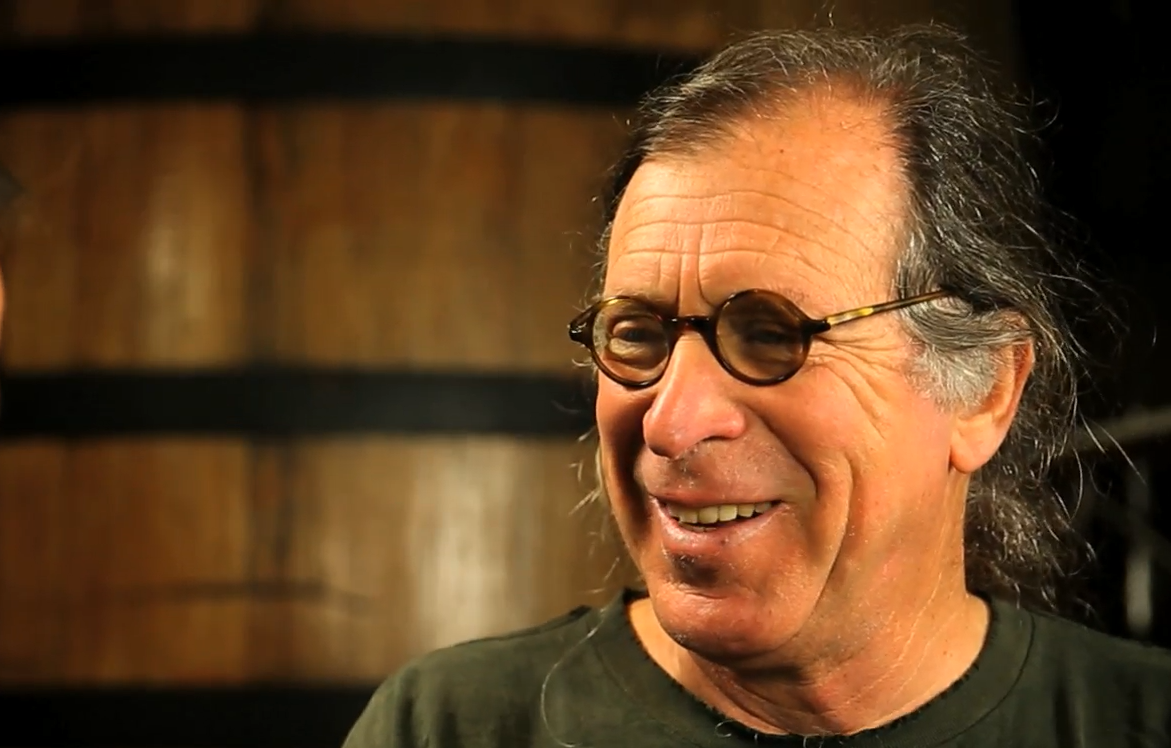 I am looking at the sheer number of words that I have written about Cigare to this point, and can point out the obvious to you (if you have gotten this far): You are reading the words of a true obsessive. I have identified so much with Bonny Doon, and Bonny Doon, for good or for not, is itself rather completely associated with Cigare. It is a wine of which I am inordinately proud, and likewise about which I have become at times enormously defensive when it has not been well loved… I certainly love Cigare more than is reasonable, and incommensurate with its contribution to the world’s wine resource.

For, at the end of the day, Cigare, resolutely remains an expression of my desire to find a wine that continues to hold an aesthetic fascination, and can continue to grow in complexity and depth. It has been my ‘controlled folly,’ in the parlance of Castaneda. I am so incredibly privileged to have been able to dream idle Cigare dreams, and to work to produce a wine that has sincerely delighted me, and the occasional Other. 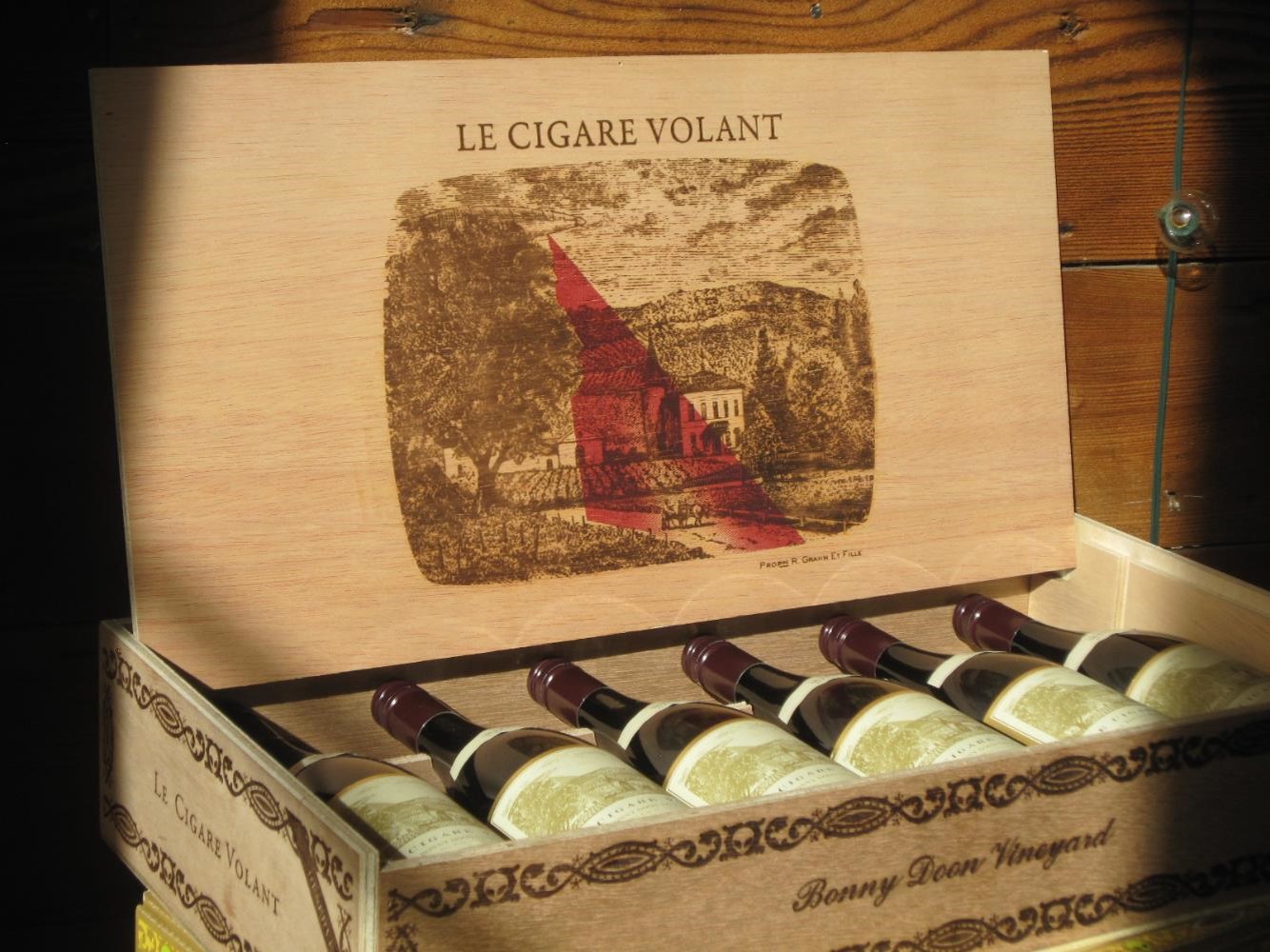 Now, the Réserve Cigares are the culmination of a Gedankenexperiment begun many years ago, essentially a long-standing meditation on the role of oxidation/reduction in the enhancement of the complexity and life-span of a given wine.

The journey began approximately thirty-five years ago when I visited Dan Wheeler of Nicasio Cellars in Soquel and tasted wine he had been ageing for decades in glass carboys in his caves; I was struck by how utterly fresh they were. A chance meeting introduced me to the wines of Emidio Pepe in Abruzzo, who aged his wines in glass carboy before rebottling into standard format; again, I was struck by the utter freshness of wines that were decades of age. Then, through chance, I happened to study at the knee of Patrick Ducourneau[1], inventor of microbullage, (or micro-oxygenation) and enjoyed deep philosophical discussions (in my rather imperfect French) about the nature of anti-oxidative systems in grapes, the biological arc of wine’s life-span, and the secret life of tannins.[2] Microbullage addresses the early part of the lifecycle of a wine.

But the work with the carboys (bonbonnes), deals with wine in its mature and complex phase. What we do is after the Cigare Volant normale has finished malolactic fermentation and the final blend composed, we then add a modest amount of sulfur dioxide (maybe 35 ppm.), bottle the wine up in 5-gallon carboy, seal them up very tightly, and place the bottles on their sides. The lees that repose at the bottom are agitated with a Teflon-coated stir bar inside the bottle through the agency of strong magnets, thus re-suspended.

The wine: “On the nose, tobacco, cherry wood ash, wild blackberry, bramble, cigar box, leather and garrigue. Is that a note of brandy? Raw ginger? Definitely a smooth spice layer. On the palate, silky, luxurious length. Oh yes, she seems to go on forever. Cinsault lends the Montmorency cherry, one of the flavor elements typically associated with Cigare (and also, coincidentally seems to get the final word in over the protestations of the vocal Syrah). But, don’t let that fool you – this is no fruit bomb. There are strong suggestions of iodine – meaty and bloody. This wine is all about elegance, and seems to disarmingly suggest a Burgundian take on Châteauneuf, if such a notion can be fashioned. This is not an ordinary wine. What is most noteworthy about it is its amazing silky texture, savoriness and infinite length. The 2010 Le Cigare Volant Réserve is wine to be savored and studied over a long meal with dear friends. Will benefit enormously from a gentle decanting or even just sitting in large glass for 30 minutes. This bodes well for the wine’s great ageing potential.” – Randall Grahm

[1] Not exactly at his knee. Patrick, a maniacal driver, had lost his driver’s license for an extended period at the time I was getting to know him; when I travelled to Madiran several times a year, I would typically chauffeur him around to his appointments and thus was able to enjoy hours of uninterrupted conversation with a real genius… It was absolutely breathtaking to spend time with him as he was working out the strategies for thinking about tannins in a deep way, and how to gently intervene to optimize both the quality and quantity of the life of a wine.

[2] I am also very fortunate to count as a best friend, Dr. Guy Miller, who also happens to be a deep thinker in matters of redox chemistry as they apply to biological systems.

TAGS: Bonny Doon vineyard
Previous Blog Posts
2014 Inspiration Vineyards Harvest Report
2017 Napa Vintage Update | Winemaker Keith Webster
5 Stories of Latino Vintners in Napa Valley | Hispanic Heritage Month
5 Wine Tasting Party Ideas
5 Women Owned Wineries and Female Winemakers To Support Right Now on Cellar Angels
We use cookies on our website to give you the most relevant experience by remembering your preferences and repeat visits. By clicking “Accept”, you consent to the use of ALL the cookies.
Do not sell my personal information.
Cookie SettingsAccept
Manage consent
Privacy Overview:
This website uses cookies to improve your experience while you navigate through the website. Out of these, the cookies that are categorized as necessary are stored on your browser as they are essential for the working of basic functionalities of the website. We also use third-party cookies that help us analyze and understand how you use this website. These cookies will be stored in your browser only with your consent. You also have the option to opt-out of these cookies. But opting out of some of these cookies may affect your browsing experience.
Necessary Always Enabled
Necessary cookies are absolutely essential for the website to function properly. These cookies ensure basic functionalities and security features of the website, anonymously.
Functional
Functional cookies help to perform certain functionalities like sharing the content of the website on social media platforms, collect feedbacks, and other third-party features.
Performance
Performance cookies are used to understand and analyze the key performance indexes of the website which helps in delivering a better user experience for the visitors.
Analytics
Analytical cookies are used to understand how visitors interact with the website. These cookies help provide information on metrics the number of visitors, bounce rate, traffic source, etc.
Advertisement
Advertisement cookies are used to provide visitors with relevant ads and marketing campaigns. These cookies track visitors across websites and collect information to provide customized ads.
Others
Other uncategorized cookies are those that are being analyzed and have not been classified into a category as yet.
SAVE & ACCEPT
Powered by