Bruised, But Not Broken: Now’s the Time to Visit Wine Country 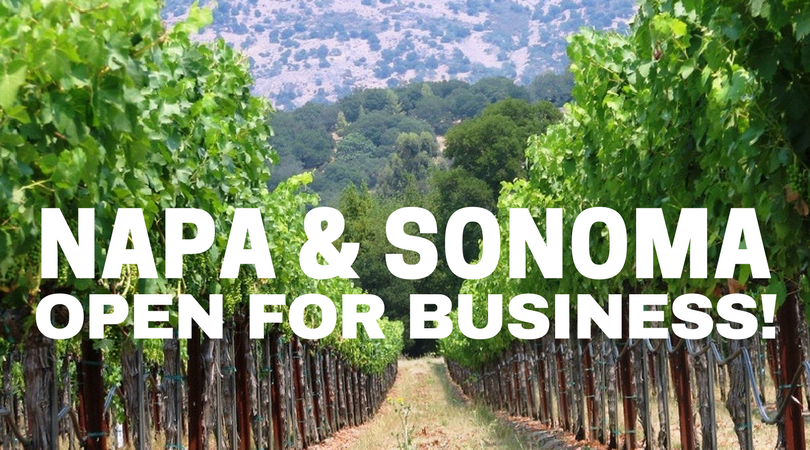 One one thousand. In the same amount of time it took to read that sentence, flames from the devastating wildfires in Northern California spread hundreds of feet. It is almost impossible to fathom how quickly the fire advanced across one of the most iconic wine regions in the world, annihilating everything in its path.

Firefighters speculate that on the first night, the aptly named Diablo winds blew flames to reach advancing speeds of 230 feet per second, or nearly the length of a football field. Ponder that for a moment, a wall of flames 30-50 feet high advancing at nearly a football field every second. Often described by survivors as sounding like a freight train, winds from the wildfires launched embers as far as a mile ahead of the front line.

October in California is known as the riskiest month for wildfires. After a drought lasting several years and no rain for months, not uncommon this time of year in the Mediterranean climate of this region, it would take very little to start a wildfire.

One of the largest of several wildfires devastating the region, the Tubbs Fire, started with just a single spark.  This fire began on tiny Tubbs Lane just north of Calistoga and right down the street from famed winery Chateau Montelena. While the exact cause of the fire has not yet been identified, what started with a flicker grew at an unprecedented rate thanks to the Diablo winds.

Named for the fact that they come from the same direction as Mount Diablo in Contra Costa County, these annual gusts are the Northern Californian counterpart to the more well known Santa Ana winds in Southern California. The Tubbs Fire had gusts of 70-80mph, or hurricane force winds, entrenched in flame.  The Atlas Peak Fire and several other smaller wildfires worked at the same time to envelop huge tracts of land. More than 1,000 firefighters worked tirelessly to save the people, homes and businesses they could.

Yet, through this unimaginable horror, the spirit of the community shines through. Stories of people risking their own lives to rouse their neighbors by going door to door waking people up, others offering rides to strangers who had been trying to escape on foot. Winery owners attempting to help save an adjoining winery even while theirs was destroyed in the tempest.

As the last of the flames are extinguished and the communities of Napa and Sonoma begin to look towards the future there comes from the region an overwhelming message of hope and gratitude, strength and resilience. The focus for many is gratefulness for what they still have and a need to do what they can to help rebuild their community. Thoughts and well wishes from all over the world have helped to bolster courage and provide support from afar.

This relatively small pocket of the planet is special for so many people, not only the ones who live and work there. They have touched the lives of many, even those who have never gazed over the majestic Napa valley with their own eyes, or stepped foot into a dusty vineyard in Sonoma. Each time a bottle of wine from one of these regions is opened it is like being transported to this beautiful land where the sun shines warmly down and vineyards dot the hillsides.

Many wine lovers have had their most precious memories celebrated with loved ones over bottles of wine from Napa & Sonoma. These wines have been a part of some of the best parts of life and it is for this reason many want to know how they can help get the region back on its feet.

The resounding answer to this question, from the mouths of winery owners, is “We are open for business! Come visit!” Do not cancel any planned trips to Northern California wine country as they are eager to receive guests. Right now the far greater concern for the California wine community is that people will not come during what is normally a busy tourist season.  Rebecca Sciandri Griffin, co-owner of Sciandri Family Vineyards says “…if you have a trip planned, don’t cancel it. We’d love to see you!” Wineries need visitors to help revitalize their businesses just by drinking wine. Talk about a win-win situation!

The very best way to help these wineries is to continue purchasing their wine directly from the wineries, even if a trip there is not possible. While buying bottles from your local retailer is always appreciated, that will not aid the wineries for quite some time. To make an immediate impact it is best to purchase now from the winery.

To assist with the recovery process Cellar Angels is leaving wines on the website longer so enthusiasts can not only enjoy a greater selection, but also help to raise funds to support wineries and Non Profit Organizations associated with Cellar Angels. Cellar Angels’ CEO Martin Cody reminds us that “these wildfires have had a damaging ripple effect on the California wine industry and for Cellar Angels that means many of our charities who rely on winery donations could also suffer as a result.” Again, for those who want to help but cannot make the trip to California, make sure to purchase from services that will immediately and directly have a positive impact on the wineries.

What should those with upcoming trips to Napa or Sonoma expect? As the fires are almost entirely contained most of the people in the area are returning to their lives and going about business as usual.  Luckily for the vineyards, most of the wildfires impacted the timbers on hillsides and not the valley floor. In fact, in many cases it was the vines themselves acting as a firebreak.

Grapevines are composed of up to 50% water making it difficult for the fast moving flames of a wildfire to burn them. Even where the area around the vineyards burned there is relatively little damage to the vines themselves. This is fantastic news for the staff members of these wineries who depend upon them for their livelihood. And for wine lovers!

As for the 2017 vintage winemakers are extremely optimistic as this years’ fruit was harvested a little earlier than usual. Approximately 90% of the fruit had already been harvested before the wildfires started. If ever there was a time to celebrate and appreciate the history of the region that time is now. Amanda Murphy, Director of Hospitality at Sojourn Cellars in Sonoma notes that their staff is safe, the winery and vineyards are unscathed and their wines are tasting better than ever. Truly, there is much good news to rejoice in from this battered region.

Bruised, but not broken. This is an important distinction to make for a community that has been through so much hardship and yet come out of it with grace and optimism. Let us all contribute to their regrowth and support the families creating some of the most memorable wines in California by purchasing the wine they have labored over to share with us. With each clink, swirl and sip we can honor their trials, triumph and hope for the future.