Another day, another bike ride.Today we decided to ride to Monte Corno and deliver a special package from Clif Family Winery and Clif Bar to Mirko at his Rifugio called La Baita. The first time we rode this “via” was last year in September, with our friends Gregg, Deven and John as day one of our 7 day bike trip through the Dolomiti. Monte Corno sits on the south edge of the Alto Piano di Asiago. Yes, Asiago, the cheese, where one rides by cheese factories on many of the amazing and beautiful roads in this area.

The food at Baita is so amazing, everything is hand made, “fatto a mano.” Including the pasta and gnocchi. It cracks us up, here it is, nothing around, at the edge of this mountain plateau and you find this place to eat that is as good as any Italian trattoria in San Francisco, New York, or Italy. The first time we went there with Paolo and Nene we ordered both the gnocchi and the pasta Bigoli. Pasta Bigoli is unique to this part of the Veneto – think really thick spaghetti. The gnocchi was amazing. This also being the first time Paolo & Nene ate at the Baita, they were also pretty blown away. However Paolo did put the challenge on the table by saying he makes a better gnocchi. The following week he did, as well as taught us his method, and…it actually was better, not by much but he won the challenge.Since moving here last October for one year, we have ridden to Monte Corno numerous times. Most of our rides include lunch (pranzo) at Refugio La Baita Busa. The first lunch was in October on a ride with Paolo and Nene, the couple that I met 25 years ago at Samsara, their Bar and Bruschetteria. Kit met them a few years later in 1994 and we have been friends ever since. Paolo & Nene, if you don’t know, inspired us to start our own Bruschetteria at Velo Vino in the form of a food truck. Which is one of the few things we miss being away for a year. 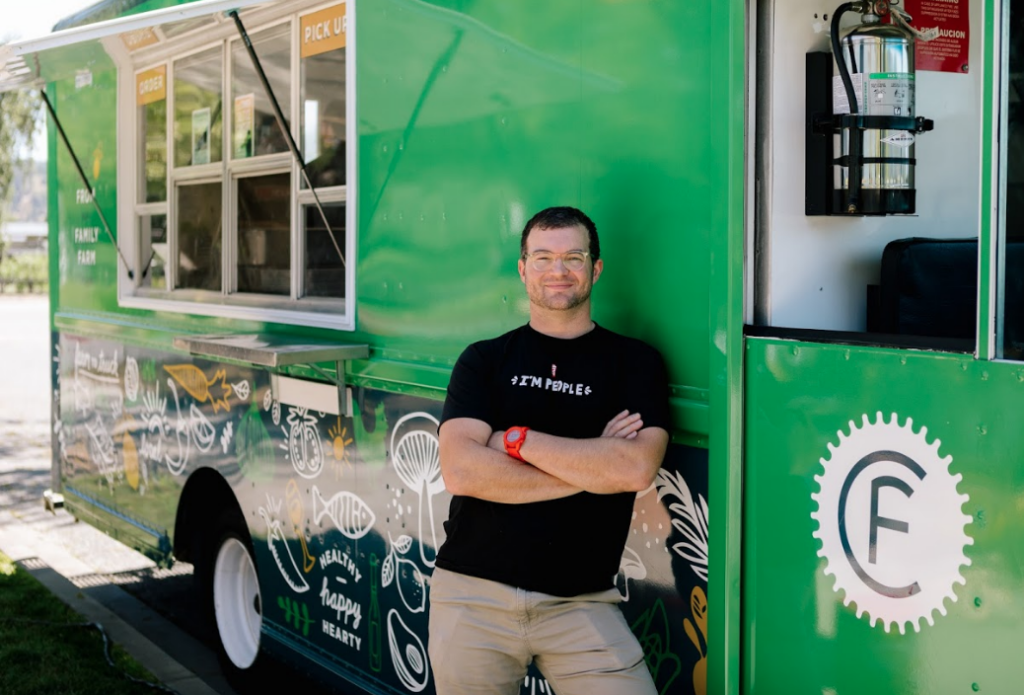 After about six lunches with Mirko, we started to get to know him, he knew we were from California but didn’t know anything about us. Sometimes after lunch he would offer us a digestive, a wonderful, homemade liquore from local alpine herbs. “Not too much” we would say, we still have to ride down the hill back to our apartment, 5000 ft. below La Baita. Yes, the climb right from “nostra casa” is a 5000 ft. climb. And we love it. The roads are perfectly paved, the climb is not too steep, the scenery is magnificent, and usually no more then six cars pass us on our way up. Since we rode there mostly in the winter, we carried all of our warm clothing in our large seat bags, even ski mittens and down coats since the “gradi” or temperature was usually below freezing.

Today however is different, warm sunny, 60-70 degrees. Primavera has arrived. Yesterday I road in my first Italian Gran Fondo, and my last. It was one of the scariest things I’ve have ever done on a bike. That story for another time.

Last time we were at Baita, just a week ago, we told Mirko we wanted to bring him some wine from our Cantina (Italian for winery). That time we drove as I was resting for the Gran “Crazy” Fondo. After lunch he gave us a bottle of his home made Liquore “Amaro” made from “Infuso di Erbe Alpine”.

After 2 hours of climbing we arrived, set up the bikes so Kit could show how we carried the goods, as I went in and told Mirko, “abbiamo consegna speciale,” we have a special delivery. He said, “per me?!”Back to today, we decided to bring Mirko two bottles of wine on our bikes. Along with a can of Dark Chocolate Toffee Pistachios from our Kitchen line, and a variety of Clif products. Note: see where I carried the reserve Cab in photo (above).

He was so grateful and thought it was especially cool that we climbed 1500 meters/5000 feet and carried everything up on our bikes.

Then we did it again, another totally amazing pranzo. Bigoli and a little white wine. Just a little, remember, we were soon to drop 5000 ft. back to our house. And we did, after “due café”, and landed safely.

Next time we ride to La Baita, we will let you know how he liked our wines!

TAGS: Clif Family Winery
Previous Blog Posts
2014 Inspiration Vineyards Harvest Report
2017 Napa Vintage Update | Winemaker Keith Webster
5 Stories of Latino Vintners in Napa Valley | Hispanic Heritage Month
5 Wine Tasting Party Ideas
5 Women Owned Wineries and Female Winemakers To Support Right Now on Cellar Angels
We use cookies on our website to give you the most relevant experience by remembering your preferences and repeat visits. By clicking “Accept”, you consent to the use of ALL the cookies.
Do not sell my personal information.
Cookie SettingsAccept
Manage consent
Privacy Overview:
This website uses cookies to improve your experience while you navigate through the website. Out of these, the cookies that are categorized as necessary are stored on your browser as they are essential for the working of basic functionalities of the website. We also use third-party cookies that help us analyze and understand how you use this website. These cookies will be stored in your browser only with your consent. You also have the option to opt-out of these cookies. But opting out of some of these cookies may affect your browsing experience.
Necessary Always Enabled
Necessary cookies are absolutely essential for the website to function properly. These cookies ensure basic functionalities and security features of the website, anonymously.
Functional
Functional cookies help to perform certain functionalities like sharing the content of the website on social media platforms, collect feedbacks, and other third-party features.
Performance
Performance cookies are used to understand and analyze the key performance indexes of the website which helps in delivering a better user experience for the visitors.
Analytics
Analytical cookies are used to understand how visitors interact with the website. These cookies help provide information on metrics the number of visitors, bounce rate, traffic source, etc.
Advertisement
Advertisement cookies are used to provide visitors with relevant ads and marketing campaigns. These cookies track visitors across websites and collect information to provide customized ads.
Others
Other uncategorized cookies are those that are being analyzed and have not been classified into a category as yet.
SAVE & ACCEPT
Powered by