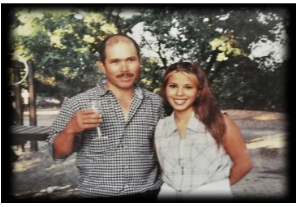 Honorio Ramirez-Mata was born in September of 1959 in San Salvador de los Ahorcados, Guanajuato Mexico.  This small village did not offer much of a future for anyone.  People were forced to live on a day to day basis. This was the way of life as they knew it.At a very young age, Honorio was taught by his father, Fabian, that the only way to survive was to live and work in the city.  Which is just what he did. Fabian lived and worked in Mexico City and would send money back to his family in Guanajuato.Honorio’s mother passed away at a very young age, therefore he was forced to grow up very quickly.  His mother, Maria Luisa, was survived by Honorio, his older sister Marcelina and his younger brother Lucio, who was only a year old.  Honorio and his siblings had to move from one family’s home to the next in order to survive on their own.

Honorio, who is my father, used to share stories with me of  what life was like for him as a child growing up.  He shared how he and his siblings had to work very hard labor when they were children in order to survive.  There were times, he recalled having to leave early on an empty stomach to go take care of the goats and work in the corn fields from dusk until dawn.  Often times there would be no food left for him to eat by the time he made it home from working all day long.

As soon as he was old enough, Honorio moved to the City of Mexico where he worked in fabrics. He soon learned to drive and became a cab driver.  However, times were still hard and it was still a daily struggle to survive. Even still, Honorio never gave up and continued to work as hard as he could to take care of himself and his family.  He soon discovered that his father Fabian, had plans to cross the Mexico border and move to California.

So Honorio and his father hired “coyotes”, who led them across the border and into the United States.  This is where they would begin their new lives… in Lamont, California. They would be recognized by the government as Braceros, which in that day in age was considered to be a very important part of the agriculture industry in the United States. The Braceros converted the agricultural fields of America into the most productive on the planet between the period of 1942 and 1964.

Once Honorio had saved enough money, he sent for me and my mother Esther Ramirez-Otero to come join him in California. There would soon be hope and new opportunities. Our future began to look much brighter.

Both of my parents, Honorio and Esther, worked in the fields and saved money for a better tomorrow.  Soon Ronald Reagan came to office as President of the United States and offered amnesty for all the Braceros.  This was a huge breakthrough for my parents and other families who had also crossed over to start a new life in the United States. This meant that now, they would all be treated and paid equally for their hard work in the fields for the agriculture industry.

My parents both knew this was only the beginning of a better future for our family.  Once our family gained some stability my mother gave birth to Ivan Ramirez born in September of 1988, followed by Ariana Ramirez born in February of 1996.

Eventually my father moved us further north to the beautiful Napa Valley in California. He would work the harvest seasons. That was the best time to make money and save for the winter.

Eventually my father’s hard work began to finally pay off.  A wonderful man named Wayne Hogue, noticed the quality, loyalty and determination that my father dedicated to his work ethics.  Unfortunately, Wayne only owned a small vineyard and couldn’t afford to hire my father full time. However, he highly recommended him to his neighbor’s, Mr. Charlie and Chuck Wagner; founders and owners of Caymus Vineyards.

Mr. Charlie and Chuck greatly valued good, hard working employees.  My father proved to be just that.  They offered to give him a dollar raise if he would learn the English language.  My father, determined that nothing was going to stand in the way of his success in this country, learned the English language.  Not only did he learn it but he spoke it perfectly. The owners of Caymus Vineyards were so impressed with my father’s hard work and determination that they honored him the title of Cellar Foreman.  This meant the world to my father and he took great pride in having earned such a title.  To him, this meant all the years of working so hard, day in and day out, had finally paid off.

Over the years working as Cellar Foreman, my father was taught how to make his own wine by the owners of the vineyard. He began making his own wine and chose me, his oldest daughter to work in his wine tasting room.  Then, sadly my father past away leaving behind so many unfulfilled plans and dreams for the future.

Honorio, my father was the most important man in my life and he meant the world to me. He taught me that the sky is the limit. I respected him so much for the heart and soul he put into his work that I decided to honor him and his dream by continuing the family business of making our own wine.

On February 14th, 2011 my husband Juan Jose Puentes, helped turn my father’s dream into reality and in honor of my father, “Honrama Cellars” was born.

Now it is our mission to keep Honrama Cellars alive and continue reaching for life’s endless possibilities.

We encourage everyone to aim for something more in their lives, pursue YOUR dreams and take time to help those who are less fortunate than yourself. We know from experience that in the end, hard work, honesty, loyalty, determination and a helping hand truly does pay off!

Shopping cart
There are no products in the cart!
Continue shopping
0