Tartrates: How’d They Get Those Crystals in the Wine?

No ma’am, the crystals on the cork aren’t red diamonds—we couldn’t sell the wine at this price if they were. Neither are they red glass, chemicals, or anything dangerous at all. They are pure, natural cream of tartar crystals; the same cream of tartar that you use in cooking! They sometimes appear inside a bottle of wine after storage, especially cool storage. But only in fine wines. They have a slightly sour taste, but since they don’t dissolve very fast in your mouth, they’re really more “gritty” than anything else. 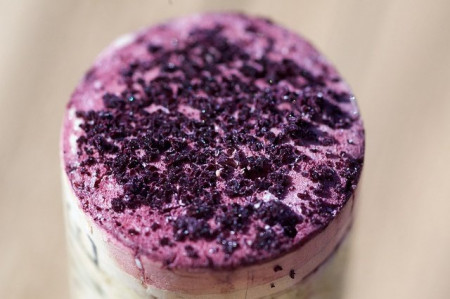 Tartaric acid is quite rare in nature, yet it is the major organic acid which occurs naturally in grapes. With one exception (Tamarind), grapes are the only economically significant fruit crop to contain relatively high concentrations of tartaric acid! Grapes are also naturally rich in potassium and, as good as that is from a health standpoint, it often leads directly to unsightly crystal formations in fine wines. For whenever you have potassium and tartaric acid together in solution, they quickly figure out how to become potassium bitartrate — the scientific name for cream of tartar—which then crystalizes out. Since the cream of tartar is even less soluble when cold than warm, chilling the wine increases crystal formation.(You sometimes find that a bottle of wine looks okay in the store, but in your refrigerator a crystalline sediment of cream of tartar may form in the bottle.)Cream of tartar is certainly not harmful, but the American consumer has been conditioned to suspect any product with sediment, especially wine, and is inclined to discriminate against such products.  Wineries, therefore, often chill new wines to just above the freezing point (around 23 degrees F.) at which time the crystals form and settle to the bottom of the tank. The wine is then racked and or filtered while still cold, to ensure the cream of tartar crystals are removed, no matter how small they might be. Then, after the wine is bottled, the consumer can chill the wine for serving without fear of new crystals forming. This process, called cold stabilization of white wines, is usually routine in all fine wine regions of the world since crystal removal doesn’t affect the taste of white wines.

Not so with red wines. Chilling reds may cause pigments, tannins, and other components of wine “body” to drop out (along with the cream of tartar). The resulting wine “loses something” and just isn’t as good as before. We don’t chill our red wines for this reason.

Do you think we should? Scott Harvey, having been European trained, makes the Scott Harvey Wines more in the “Old World Style”. They tend to have higher natural acidity. Thus, there’s a greater chance to see crystals in our wines than in those wines produced more in the “New World Style”. Will the consumer know that only the finest wines can form crystals*— and learn to accept them (decanting the wine)? Or, will we be forced to cold stabilize and run the risk of reducing some wine to mediocrity? Only you can tell us.

*Lesser wines always have lower natural acidity; too low for any excess to crystalize out of solution. They CAN’T produce crystals.

TAGS: wine educationwinemaking
Previous Blog Posts
2014 Inspiration Vineyards Harvest Report
2017 Napa Vintage Update | Winemaker Keith Webster
5 Stories of Latino Vintners in Napa Valley | Hispanic Heritage Month
5 Wine Tasting Party Ideas
5 Women Owned Wineries and Female Winemakers To Support Right Now on Cellar Angels
We use cookies on our website to give you the most relevant experience by remembering your preferences and repeat visits. By clicking “Accept”, you consent to the use of ALL the cookies.
Do not sell my personal information.
Cookie SettingsAccept
Manage consent
Privacy Overview:
This website uses cookies to improve your experience while you navigate through the website. Out of these, the cookies that are categorized as necessary are stored on your browser as they are essential for the working of basic functionalities of the website. We also use third-party cookies that help us analyze and understand how you use this website. These cookies will be stored in your browser only with your consent. You also have the option to opt-out of these cookies. But opting out of some of these cookies may affect your browsing experience.
Necessary Always Enabled
Necessary cookies are absolutely essential for the website to function properly. These cookies ensure basic functionalities and security features of the website, anonymously.
Functional
Functional cookies help to perform certain functionalities like sharing the content of the website on social media platforms, collect feedbacks, and other third-party features.
Performance
Performance cookies are used to understand and analyze the key performance indexes of the website which helps in delivering a better user experience for the visitors.
Analytics
Analytical cookies are used to understand how visitors interact with the website. These cookies help provide information on metrics the number of visitors, bounce rate, traffic source, etc.
Advertisement
Advertisement cookies are used to provide visitors with relevant ads and marketing campaigns. These cookies track visitors across websites and collect information to provide customized ads.
Others
Other uncategorized cookies are those that are being analyzed and have not been classified into a category as yet.
SAVE & ACCEPT
Powered by