Written by guest blogger, Don Carter of WineSnark.com The wise-ass guide to wine appreciation.
Sue McNerney was hoping to turn her passion for wine into a profitable business when the Napa earthquake struck on the morning of August 24th. “I was standing in the kitchen when I saw the pictures on my iPad and I walked over to the door and I said, ‘Oh my God. It’s gone. It’s gone!’ ” 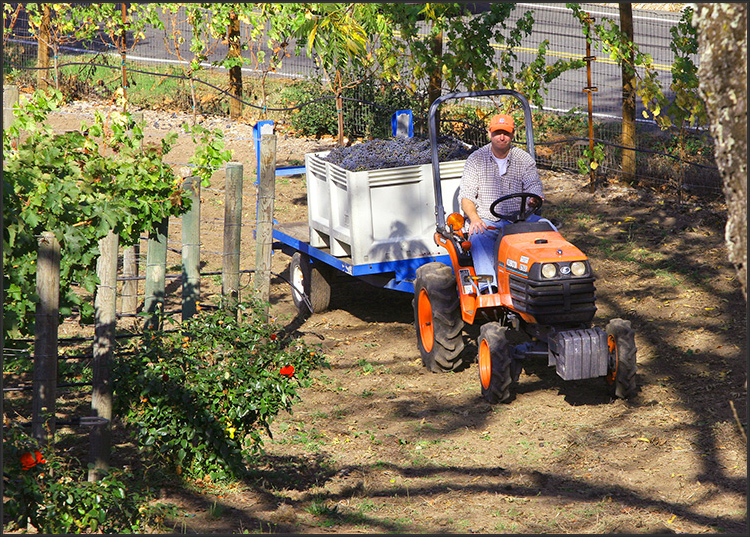 In 1999 Sue and her husband Bob bought property in the Coombsville region of Napa Valley with the dream of producing estate grown Cabernet Sauvignon. They converted a one-acre horse pasture on their property into a vineyard and named it Belles Filles in honor of their three daughters. Coombsville, located in the foothills of the Vaca Mountains east of downtown Napa, was awarded its own AVA designation in 2011 and has quickly gained a reputation for producing outstanding Cabernet Sauvignon.

“Bob and I worked this vineyard every year. We worked hard and we were blessed with good fruit. Our dream was to produce this small lot wine.” At the time Bob was a successful sales and marketing executive and together they were planning their future in the valley they cherished. “For the first few years we just shared our wine with family and friends,” said Sue. “We were going to make this a little viable business together when Bob retired, to work it together after the kids were grown.”

“I’m blessed in so many ways,” Sue continued. “Our three girls, Lauren, Ellen and Jennifer grew up here in the Napa Valley, and I was constantly telling them when they were little, ‘Do you know how lucky you are to live in the Napa Valley?’ ” Sue relentlessly reminded the girls of their blessings and it eventually became the family joke. When Sue started in, the girls would reply, “Mom, enough already, we know how lucky we are!” 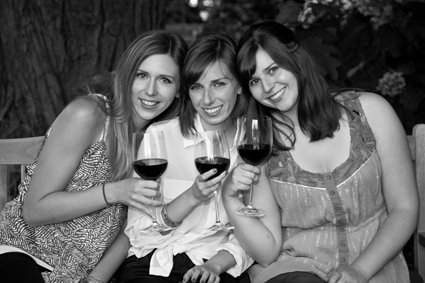 When it came time to label their wine the girls got together to create an appropriate name. “I’m a bit of a Francophile,” confesses Sue, so when the girls came up with Le Chanceux, Sue and Bob loved it and the name stuck.

In 2010 the McNerneys released their first wine and their efforts were rewarded with a Double Gold Medal at the Finger Lakes International Wine Competition. “It was really an honor to get a Double Gold,” Sue remembered. “Forty-two Double Gold medals were given out of 1,500 and we were one of them. That was really a wonderful accomplishment.”

The award was an uplifting reaffirmation of their plans and their dream was on its way to becoming reality, “but unfortunately God had other plans for us,” recalled Sue. Early in 2010 they received the devastating news that Bob had cancer.

“Bob passed away in July of 2010 and it took me a while to get on my feet.” Despite her loss Sue somehow found the resolve to continue with the dream that she and Bob had shared. “I decided in 2011, ‘I’m going to try and give it a shot.’ I did a business plan and I’m committed to making this small lot production wine.” Sue soon launched an e-commerce website and began selling her wine. In 2014 she hired up-and-coming Winemaker Jason Moore and the future looked promising.

Napa wineries were anticipating an early harvest in 2014 and by mid-August most winemakers had bottled their 2012 wines to create space for the new vintage. But Sue’s entire production from 2012 (and 2013) was still aging in oak barrels at Napa Barrel Care, a huge facility that stores thousands of wine barrels for the trade.

And then the 6.0 magnitude earthquake bulldozed through lower Napa Valley at 3:20 AM on August 24th.

The day after the earthquake Sue began getting detailed reports of the devastation in and around Napa. “I got an email from Napa Barrel Care first thing Monday morning saying that they were hit really, really hard. There were stories of wine coming out of the warehouse into the parking lot. Then I saw pictures and the first picture was taken exactly where my wines were stored.” 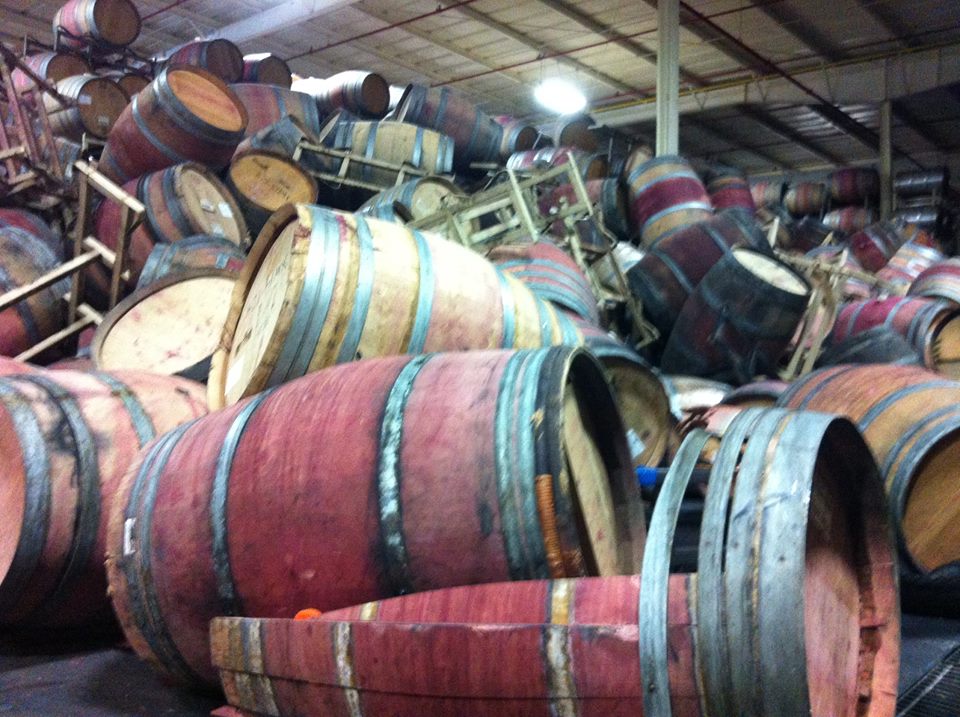 At Napa Barrel Care, wine barrels stacked 24 feet high had toppled over and collapsed into a soggy quagmire of metal, wood and wine. The images of the destruction reached Sue while she was taking stock of the situation at home. “My first thought was my house didn’t have any structural damage, so I was grateful for that.” Sue paused at the other end of the line and I could sense her drifting back to that moment at the kitchen door, or perhaps further back, to a time when she watched the girls playing in the yard and Bob waved to her from the vineyard.

When she finally spoke, she said more to herself than to me, “And then I thought … and it’s not cancer.”

On Wednesday Sue received word from Deb Lecours at Napa Barrel Care and she said, ‘Sue why don’t you come and we’ll see if we can locate some of your barrels.’ So I’m driving there and I’ve just got a stomach ache. I feel like ‘Oh this is not good, this is not good.’ So I walk in the warehouse and it is a mess. I mean barrels are just everywhere. They’re still lifting barrels one by one and trying to rerack them.”

As Sue examined the devastation Deb approached her and said, “Sue, do you know how lucky you are?”

Sue looked at the frustrated crowd, all waiting for some word about their wines, and she thought what possible luck can come out of this.

Deb explained that she had just located Sue’s wine barrels. They had been brought down to the production area on Friday before the earthquake in anticipation of racking and bottling the following week. There wasn’t a scratch on them. “What was really odd,’ said Sue, “was they also brought down my 2013 in error. I wasn’t planning on racking that or doing anything with it!”

“So you know some angels were watching over me,” sighed Sue. “Maybe it was Bob. You know maybe the plan was a good one. Maybe I am meant to do this.”

An elated Sue turned back to Deb and cried, “Do you know what my label is?”

Deb smiled and replied, “Yes I speak French and yes, I know Le Chanceux means ‘The Lucky One.’ ”

“Yes, I definitely am The Lucky One,” Sue concluded. “And the good thing is I’ve always known that. I have learned what’s important in life … I am blessed in so many ways.” 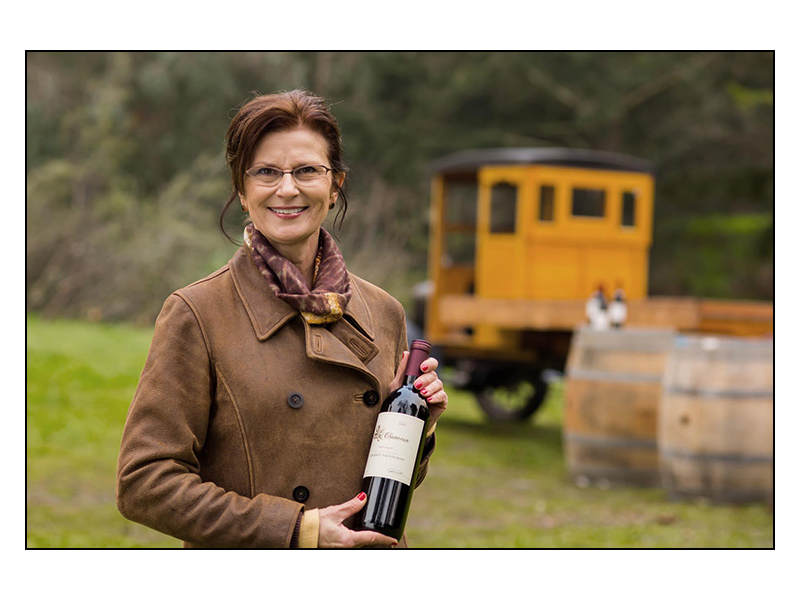 TAGS: le chanceux
Previous Blog Posts
2014 Inspiration Vineyards Harvest Report
2017 Napa Vintage Update | Winemaker Keith Webster
5 Stories of Latino Vintners in Napa Valley | Hispanic Heritage Month
5 Wine Tasting Party Ideas
5 Women Owned Wineries and Female Winemakers To Support Right Now on Cellar Angels
We use cookies on our website to give you the most relevant experience by remembering your preferences and repeat visits. By clicking “Accept”, you consent to the use of ALL the cookies.
Do not sell my personal information.
Cookie SettingsAccept
Manage consent
Privacy Overview:
This website uses cookies to improve your experience while you navigate through the website. Out of these, the cookies that are categorized as necessary are stored on your browser as they are essential for the working of basic functionalities of the website. We also use third-party cookies that help us analyze and understand how you use this website. These cookies will be stored in your browser only with your consent. You also have the option to opt-out of these cookies. But opting out of some of these cookies may affect your browsing experience.
Necessary Always Enabled
Necessary cookies are absolutely essential for the website to function properly. These cookies ensure basic functionalities and security features of the website, anonymously.
Functional
Functional cookies help to perform certain functionalities like sharing the content of the website on social media platforms, collect feedbacks, and other third-party features.
Performance
Performance cookies are used to understand and analyze the key performance indexes of the website which helps in delivering a better user experience for the visitors.
Analytics
Analytical cookies are used to understand how visitors interact with the website. These cookies help provide information on metrics the number of visitors, bounce rate, traffic source, etc.
Advertisement
Advertisement cookies are used to provide visitors with relevant ads and marketing campaigns. These cookies track visitors across websites and collect information to provide customized ads.
Others
Other uncategorized cookies are those that are being analyzed and have not been classified into a category as yet.
SAVE & ACCEPT
Powered by