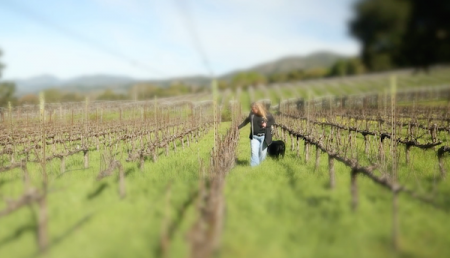 On a daily basis, I meet people that have been born and raised here in Napa Valley that seem as if they’ve been in training on the refinements of various Cabernet clones since first grade….or at least that is what I imagine! As for me, I was born the youngest daughter of Tom & Peg Trotter’s 16 kids in Philadelphia, PA. We only had “fine wine” in the house for special occasions…and it was either Cold Duck or Blue Nun! The bottles were stored in the cabinet above the double oven in our un-air conditioned kitchen. 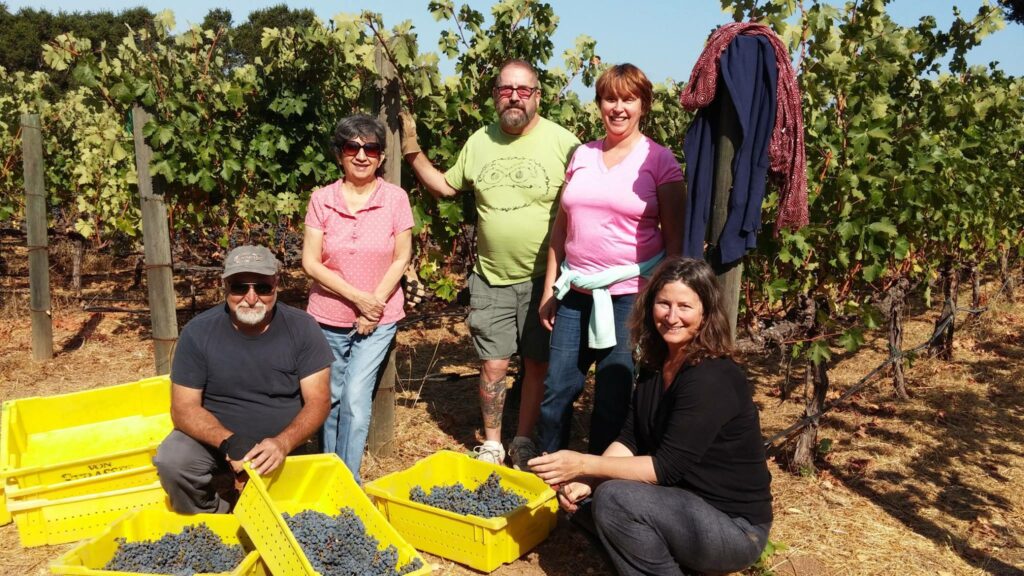 After my first visit to northern California in my late teens, I just knew this is where I was meant to be. I returned permanently at age 19. Later (after I turned 21, of course) a boyfriend introduced me to his fine wine collection and reprimanded me for not appreciating it the same way he did. All it took was one friend to offer me wine at dinner then I fell in love with this liquid art.

Luckily, I also fell in love with my husband and we moved to Calistoga where I found a new beginning in this fantastic wine region. First, I found work in a tasting room, then as a cellar rat, six years later, found myself a Cellar Master. I switched to a third winery and for ten more years worked as an apprentice winemaker. After working in all areas of an even tinier, fourth winery, my mentor (a winemaker with sixty years experience in Napa Valley) approached me and stated quite flatly, “You know what you’re doing – you should do this on your own.” 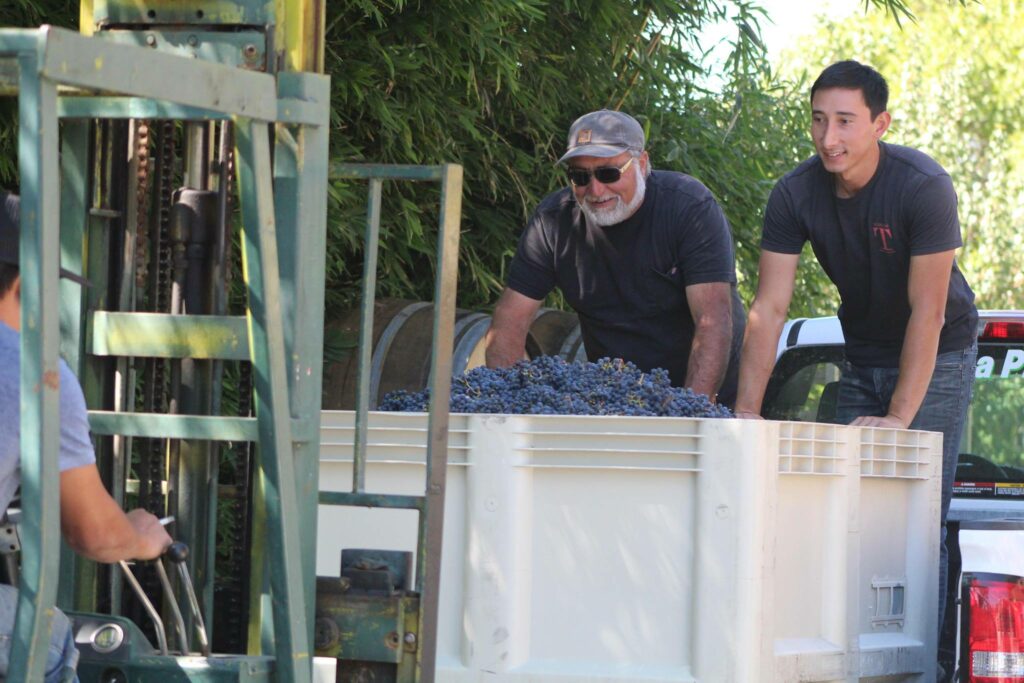 Just a couple of years later, in 2011 a tiny little vineyard presented herself for my consideration. Well, I jumped at the chance with my Sistas of d’Vine words in my head: “if you dream it, it can happen!” Granted that was a very difficult year due to rain during harvest. (Oh the mold and stuck tractors! Ugh!) But my Sistas came through and together we picked all day. The grapes looked like kryptonite from the mold, but we hand sorted every single berry and chose only the best. I aged the wine in small French oak barrels and the result was a Double-Gold along with four other precious metals! 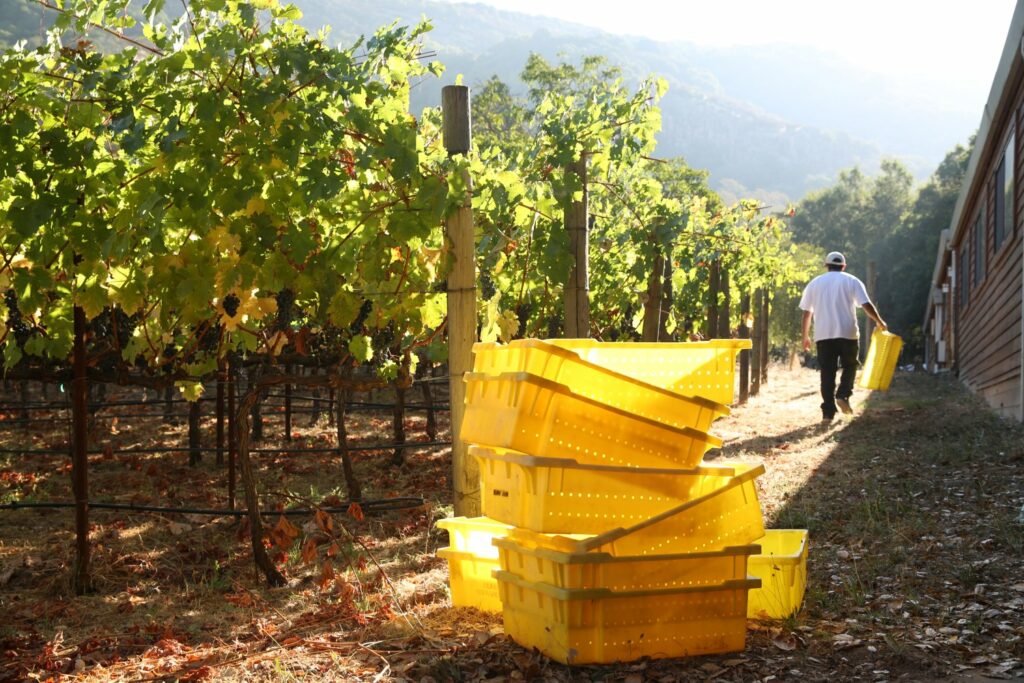 The 2012 vintage was picked and hand-sorted with the same loving hands and a few of our trusty men. The vineyard was more generous with her beautiful ripe clusters and after aging, this wine will be released in May of 2015. I like focusing on vineyard designated productions because I want to see each vineyard shine to its potential. The vineyards I choose are “minimally worked” meaning they are at the very least biodynamic and dry-farmed. Quoting the renowned regenerative viticulturist, Daphne Amory, “Less is more.” In my wines, I hope you will be able to taste each distinct local and growing season. The resulting wines should be unique, rich, delicious and bring joy to all those who sip it…after all it is liquid art!

TAGS: Trotter 1/16 Winerywinemakingwomen in wine
Previous Blog Posts
2014 Inspiration Vineyards Harvest Report
2017 Napa Vintage Update | Winemaker Keith Webster
5 Stories of Latino Vintners in Napa Valley | Hispanic Heritage Month
5 Wine Tasting Party Ideas
5 Women Owned Wineries and Female Winemakers To Support Right Now on Cellar Angels
We use cookies on our website to give you the most relevant experience by remembering your preferences and repeat visits. By clicking “Accept”, you consent to the use of ALL the cookies.
Do not sell my personal information.
Cookie SettingsAccept
Manage consent
Privacy Overview:
This website uses cookies to improve your experience while you navigate through the website. Out of these, the cookies that are categorized as necessary are stored on your browser as they are essential for the working of basic functionalities of the website. We also use third-party cookies that help us analyze and understand how you use this website. These cookies will be stored in your browser only with your consent. You also have the option to opt-out of these cookies. But opting out of some of these cookies may affect your browsing experience.
Necessary Always Enabled
Necessary cookies are absolutely essential for the website to function properly. These cookies ensure basic functionalities and security features of the website, anonymously.
Functional
Functional cookies help to perform certain functionalities like sharing the content of the website on social media platforms, collect feedbacks, and other third-party features.
Performance
Performance cookies are used to understand and analyze the key performance indexes of the website which helps in delivering a better user experience for the visitors.
Analytics
Analytical cookies are used to understand how visitors interact with the website. These cookies help provide information on metrics the number of visitors, bounce rate, traffic source, etc.
Advertisement
Advertisement cookies are used to provide visitors with relevant ads and marketing campaigns. These cookies track visitors across websites and collect information to provide customized ads.
Others
Other uncategorized cookies are those that are being analyzed and have not been classified into a category as yet.
SAVE & ACCEPT
Powered by