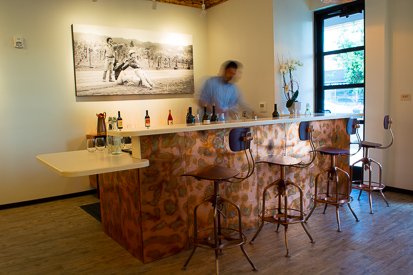 We are the new kids on the block!

I am very excited to announce that we just opened the doors of our tasting room in Downtown Napa. Although we are a new addition to the array of tasting locations in the heart of downtown, it’s been a fourteen-year journey to get to this point. In 2005, we started making two hundred cases of wine thinking that it would be a breeze to sell such a small lot. I could not have been more wrong! It takes three years to produce a cabernet sauvignon wine, and so many things can happen in that timespan.

We didn’t anticipate the 2008 recession. I was completely shocked by how things turned in the wine industry. The first years for us were challenging as we confronted a difficult market. I couldn’t grasp my husband’s persistence to keep the production going amidst the challenges. Compared to our solid farming business, selling wine in such a tough market didn’t give me much encouragement.

Then one day back in 2013, Mario and I poured our wines at a public wine tasting event in San Francisco. A guest approached our table to taste our wines and before long was asking Mario about his story. I quickly realized that our guest was knowledgeable about wine, the Napa Valley wine industry and its people. Mario intuitively reminisced how he arrived to Napa in 1973 with the idea to save money for a grocery store in Mexico City, working for more than sixteen years as the vineyard manager for To Kalon and Opus One vineyards, then later at Stags Leap Wine Cellars before starting his own business. I knew that story by heart and believed that it was all the motivation I needed to drive our wine production. But I took away a new and deeper inspiration from that encounter.

Our guest stepped back a little to get a better picture of Mario and myself—two bottles on the table, our cabernet sauvignon and sauvignon blanc, and the two of us. Then he stepped forward and said, “Wow, Mario, I am very impressed with your wines. How does it feel to have your name on a label after so many years of hard work? To me, this is the American Dream come true.”

After surviving several years in a hard market, I was disillusioned with the idea that hard work alone was the key to success. Mario though, with his authentic candor, smiled and replied, “This is an acknowledgement to the people who have supported my career. Without that help, I wouldn’t be where I am. I would not have my business, and even in my personal life, I would not have the beautiful family that I have.”

His answer shook my core because to him success was so much more than just his name on a label. It was a celebration of gratitude. It became my inspiration and my mission. I would help to spread his appreciation for this land and its people in every bottle of wine.

TAGS: mario bazan cellarsNapa Valleywine tasting
Previous Blog Posts
2014 Inspiration Vineyards Harvest Report
2017 Napa Vintage Update | Winemaker Keith Webster
5 Stories of Latino Vintners in Napa Valley | Hispanic Heritage Month
5 Wine Tasting Party Ideas
5 Women Owned Wineries and Female Winemakers To Support Right Now on Cellar Angels
We use cookies on our website to give you the most relevant experience by remembering your preferences and repeat visits. By clicking “Accept”, you consent to the use of ALL the cookies.
Do not sell my personal information.
Cookie SettingsAccept
Manage consent
Privacy Overview:
This website uses cookies to improve your experience while you navigate through the website. Out of these, the cookies that are categorized as necessary are stored on your browser as they are essential for the working of basic functionalities of the website. We also use third-party cookies that help us analyze and understand how you use this website. These cookies will be stored in your browser only with your consent. You also have the option to opt-out of these cookies. But opting out of some of these cookies may affect your browsing experience.
Necessary Always Enabled
Necessary cookies are absolutely essential for the website to function properly. These cookies ensure basic functionalities and security features of the website, anonymously.
Functional
Functional cookies help to perform certain functionalities like sharing the content of the website on social media platforms, collect feedbacks, and other third-party features.
Performance
Performance cookies are used to understand and analyze the key performance indexes of the website which helps in delivering a better user experience for the visitors.
Analytics
Analytical cookies are used to understand how visitors interact with the website. These cookies help provide information on metrics the number of visitors, bounce rate, traffic source, etc.
Advertisement
Advertisement cookies are used to provide visitors with relevant ads and marketing campaigns. These cookies track visitors across websites and collect information to provide customized ads.
Others
Other uncategorized cookies are those that are being analyzed and have not been classified into a category as yet.
SAVE & ACCEPT
Powered by