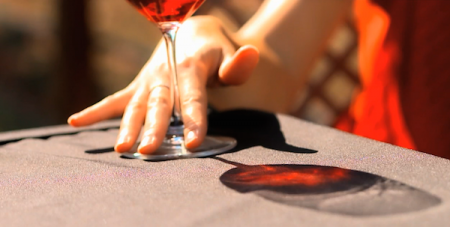 The wine has a dark red color with Blackcurrant and cherry aromas integrated with earthy, nutty, and chocolate notes. The wine is layered with juicy blackberry, cherry, espresso, and clove with subtle tannins and a smooth, fruit-driven mouthfeel. 2014 is the first Merlot produced by Greyscale. Our goal was to produce a right-bank Bordeaux-style wine with a complex structure of red and black fruit. This wine pairs well with pastas and chicken as well as other lighter meals. The wine is drinking well now but will continue to improve for many years and will last at least 10-12 years.

Merlot is a genetic child of Cabernet Franc and other unknown varietals. Consequently, it is the half-brother of Cabernet Sauvignon which is known to be from Cabernet Franc and Sauvignon Blanc. So it is not surprising that Merlot and Cabernet Sauvignon, and for that matter Cabernet Franc, taste similar and work well together in blends. Great Merlot wines from Bordeaux, typically from St. Emilion and Pomerol on the right bank, helped to establish customer demand for wines made from this varietal. Merlot wines are also produced in Italy often blended with Sangiovese and other red varietals.

The heritage of Merlot is traced back to the first century in France. Evidently, blackbirds concentrated in the Merlot vineyards to eat the grapes so the French word for blackbird (merle) was adapted to name the grape.

In terms of growing, Merlot production is significantly higher compared to Cabernet in France and Italy while Cabernet is much higher in Napa Valley. A key comparison is the relative cost per ton of grapes. In 2015, Merlot grapes cost roughly $3,000 per ton compared to Cabernet Sauvignon that cost around $7,000 per ton. Merlot demand and production dropped significantly after 2004 when the movie Sideways was released. One of the main characters was a wine aficionado who waxed euphoric about Pinot Noir and denigrated Merlot. This caused customers to think more about the wine they were tasting and decided that the widely marketed inexpensive, fleshy Merlots were not very good. However, in the last couple of years more vintners are producing more interesting Merlot wines that are less expensive than Cabernet Sauvignons.

The Merlot grapes come from Orchard Vineyard located west of Highway 29 in the Oak Knoll District. Because the vineyard is near the Mayacamas Mountain benchland, it has a significant component of alluvial soil which contains organic material making the area quite fertile. Temperatures are cooler than farther north in the valley but not as cool and damp as vineyards in Carneros which are closer to the San Francisco Bay. The vineyard manager says the location, soils, and weather of this vineyard produces the best Merlot grapes in Napa Valley. The Merlot planted is clone 181 that traces its origins to Pomerol.

Merlot produces more grapes per ton than Cabernet Sauvignon so some grape clusters are cut-off and discarded through the early summer, called “green harvesting,” so the remaining clusters can fully develop. The rows in Orchard run North-South and the canopy is trained and pruned to put the grape clusters on the East side of the vines so they receive the less intense morning sunlight. The canopy blocks the very intense afternoon sunlight which further improves the grapes.

The grapes were picked during the evening on September 12, 2014 starting around 2 AM and brought to the winery early in the morning. The grapes measured 26 degrees Brix (sugar) and 3.57 pH (acid). The clusters were destemmed and put into a stainless steel tank. The material in the tank is called “must.”

The must was inoculated with CSM which was derived from yeasts used in Bordeaux that produces an aromatic profile of berries, spice and licorice and has been shown to reduce the vegetal (green) aromas that many consumers dislike. CSM adds complexity with a balanced, round mouthfeel and promotes malolactic fermentation. Fermentation is an important step in winemaking so Diammonium Phosphate (DAP) is added to provide adequate yeast nutrients to keep a strong fermentation going from start to finish. The Greyscale Merlot grape fermentation finished 13 days after inoculation. The must was pressed to produce the wine which was aged in 100% French oak barrels for 17 months.

The wine was blended in November 2015. We added Cabernet Franc from Yates Vineyard in the Mayacamas Mountains separating Napa and Sonoma Valley for its floral element, Petit Verdot from Stagecoach Vineyards for its earthiness, and Malbec from Woolard Vineyard in Sonoma Valley for its dark fruit. Even though we only add 1% of Petit Verdot and Malbec, it is amazing how such a small addition can cause the wine to blossom.

After blending, the wine was returned to the barrels until bottling 4 months later on March 22, 2016. Wine continues to change whether in barrels or in bottles. Giving the blended components a chance “to marry” creates a significantly better product. At bottling the wine was measured with 14.7% alcohol, 3.49 pH, and 7.2g/L total acidity. The wine was aged in bottle for 6 months and released on September 1, 2016.

Why did you name the winery Greyscale Wines?

The name Greyscale Wines came from an observation Jean made that, “Wine is neither black nor white. It’s always shades of grey.” This phrase captures our philosophy of winemaking – it is not a scientific formula. Each year we adjust to weather, fruit quality, winemaking opportunities, and blending components to produce the very best wine possible. Our consulting winemaker is Kian Tavakoli. He has a degree in genetics from U.C. Davis and experience working at Opus One and Clos Du Val. His french heritage fostered a love for Bordeaux style wines that is a perfect complement to our philosophy. We have worked together with Kian since we first made wine in 2006.

Angel Note: Find Greyscale Wines 2014 Napa Valley Merlot on Cellar Angels for one month only starting Monday, December 12 2016.  Proceeds from every sale will support a charity of your choice.

TAGS: Greyscale WinesNapa Valleyvineyardswinemaking
Previous Blog Posts
2014 Inspiration Vineyards Harvest Report
2017 Napa Vintage Update | Winemaker Keith Webster
5 Stories of Latino Vintners in Napa Valley | Hispanic Heritage Month
5 Wine Tasting Party Ideas
5 Women Owned Wineries and Female Winemakers To Support Right Now on Cellar Angels
We use cookies on our website to give you the most relevant experience by remembering your preferences and repeat visits. By clicking “Accept”, you consent to the use of ALL the cookies.
Do not sell my personal information.
Cookie SettingsAccept
Manage consent
Privacy Overview:
This website uses cookies to improve your experience while you navigate through the website. Out of these, the cookies that are categorized as necessary are stored on your browser as they are essential for the working of basic functionalities of the website. We also use third-party cookies that help us analyze and understand how you use this website. These cookies will be stored in your browser only with your consent. You also have the option to opt-out of these cookies. But opting out of some of these cookies may affect your browsing experience.
Necessary Always Enabled
Necessary cookies are absolutely essential for the website to function properly. These cookies ensure basic functionalities and security features of the website, anonymously.
Functional
Functional cookies help to perform certain functionalities like sharing the content of the website on social media platforms, collect feedbacks, and other third-party features.
Performance
Performance cookies are used to understand and analyze the key performance indexes of the website which helps in delivering a better user experience for the visitors.
Analytics
Analytical cookies are used to understand how visitors interact with the website. These cookies help provide information on metrics the number of visitors, bounce rate, traffic source, etc.
Advertisement
Advertisement cookies are used to provide visitors with relevant ads and marketing campaigns. These cookies track visitors across websites and collect information to provide customized ads.
Others
Other uncategorized cookies are those that are being analyzed and have not been classified into a category as yet.
SAVE & ACCEPT
Powered by