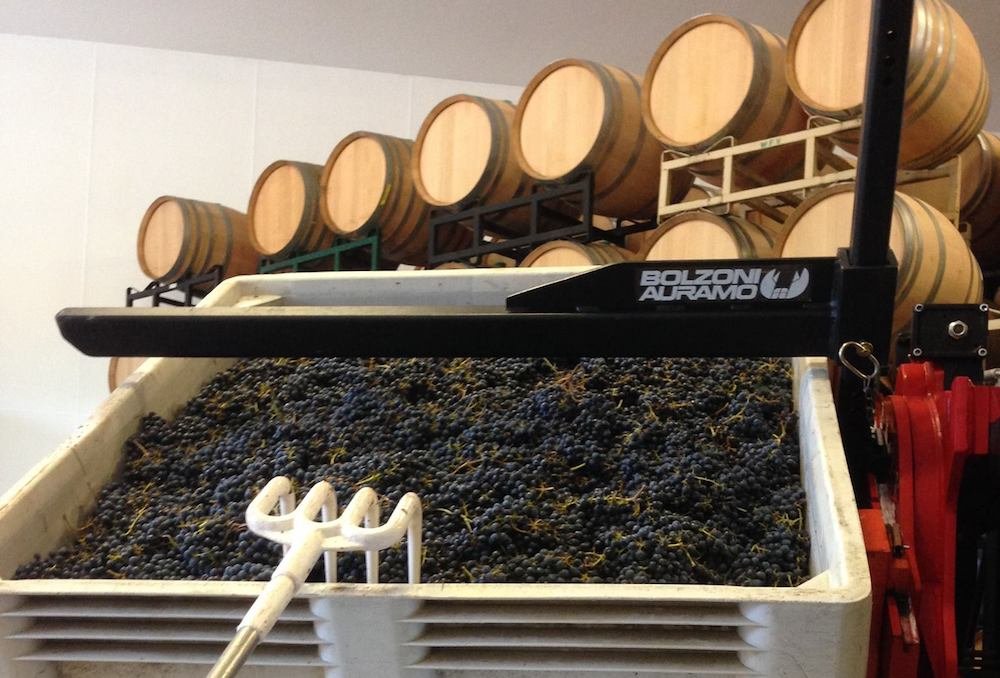 Guest blog courtesy of Owner Larry Rowe, Greyscale Wines, Napa Valley
Greyscale Wines, established in 2008 by Jean and Larry Rowe, produces hand-crafted premium wines using high-quality Napa Valley grapes.  The Greyscale ‘14 Rutherford Cabernet has a dark red color with an inky purplish hue. It has an earthy complex nose with sweet oak, dried herb, black fruit (black berries, black cherry, and blackcurrant) and a touch of white pepper. The wine is well-balanced with a silky and cohesive taste of black fruit with polished tannins and a trace of fennel in its long finish.Our consulting winemaker is Kian Tavakoli. He has a degree in genetics from U.C. Davis and experience working at Opus One and Clos Du Val. His French heritage and time spent working at chateaux in Bordeaux fostered a love for a style wines that is a perfect complement to our philosophy. Our goal is to produce Bordeaux-inspired wine that reflects Napa Valley Cabernet Sauvignon and is food-friendly. 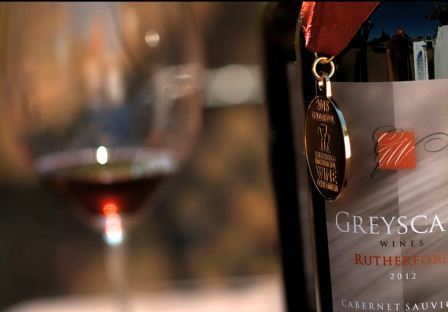 The Greyscale Wines ‘14 Rutherford Cabernet is 92% Cabernet Sauvignon blended with 6% Merlot to enhance the mid-palate and 2% Petit Verdot to add spice to the finish.  It pairs well with meat dishes (e.g., steak, venison, duck, and rustic pasta dishes), and should age well for 10-15 years.

Napa Valley vintage 2014 was a challenging year because of the magnitude 6.0 South Napa earthquake that struck on August 24th. While one barrel of Sauvignon Blanc was impacted by the quake, the Cabernet grapes on the vine in Rutherford were not impacted. The grapes were harvested on September 19th which was a week earlier than 2013 and four weeks earlier than 2012, both of which were outstanding vintages. Critics have ranked the vintages between 2012 and 2014 as among the best ever produced in Napa Valley.

The grapes come from a famed vineyard in Rutherford located in the middle of the valley between Conn Creek and Silverado Trail. The vineyard, first planted in 1895 by Mrs. Thomas Rutherford, has provided grapes for many prominent Napa Valley Cabernets.  The vines are 25-30 years old and grafted with Clone 4 Cabernet grapes that have a strong flavor intensity with excellent color, aromas, and palate balance. This particular vineyard is known for producing wines with elegant and silky fruit rather than powerful, blockbuster flavors as found in some Napa Valley Cult Wines. Every time we taste these wines, we are reminded of the elegance and soft mouth-feel produced by wines made with grapes from this vineyard. 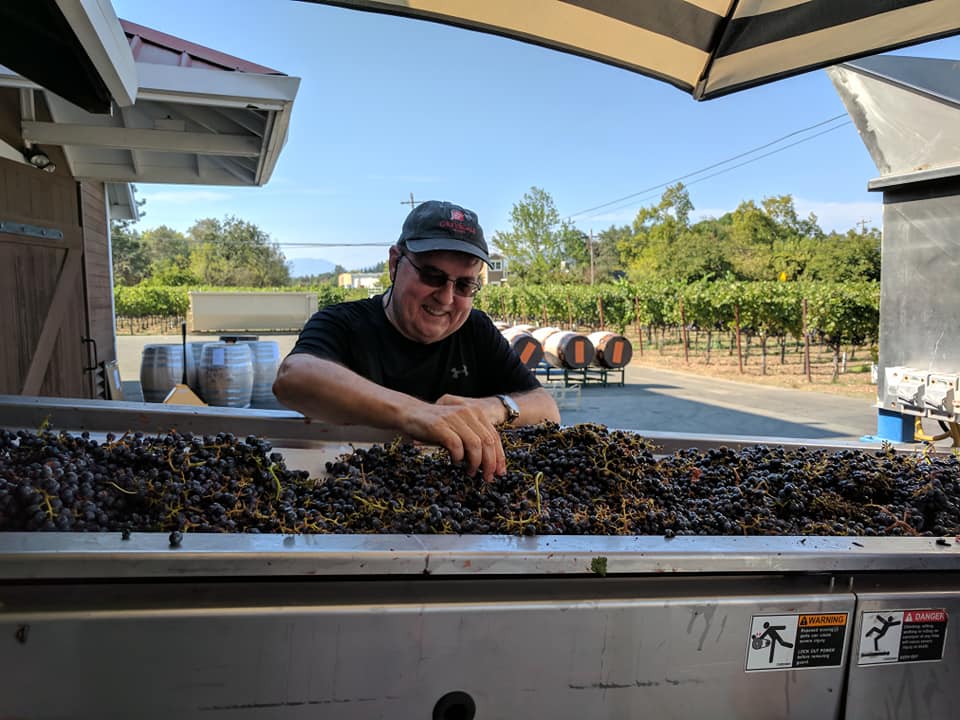 The 2014 vintage produced excellent crop with quality and depth of flavor. The Napa Valley grape growing season runs from mid-March through mid-October. Rainfall is important, but not during the growing season. 2014 was almost a perfect year. Over 14” of rain fell between January and March, and less than 0.5” of rain fell between May and September which includes the all important time of flowering, fruit set (when flowers turn to small green grape clusters), and veraison (when the plump berries convert from green to purple). Moreover, 2014 temperatures were nearly perfect as June through early October produced consistent heat during the day with highs between 80-95 and lows between 45-60 degrees Fahrenheit. The picture shows a summary of the 2014 vintage weather in a chart produced by the Napa Valley Vintners. 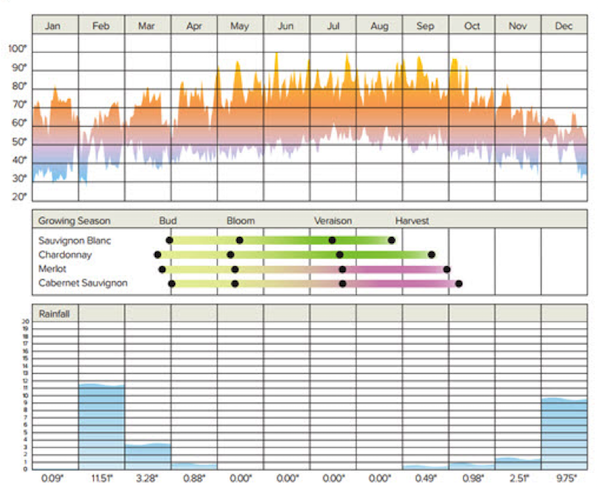 2014 Napa Valley Vintage at a Glance

The grapes were picked on September 19, 2014 starting around 2 AM and brought to the winery early in the morning – the picture below shows what picking at night looks like with lights mounted on tractors and picker’s heads to illuminate the vines and clusters.  The grapes measured 28.5 degrees Brix (sugar) and 3.71 pH. Both numbers are right where we wanted them when we pick. The clusters were sorted and destemmed, and the whole berries were moved to a small stainless steel tank where they rested for two days, called maceration, in which the grapes, seeds, and stems (called must) are soaked in the wine to extract color, aroma compounds, and tannins. 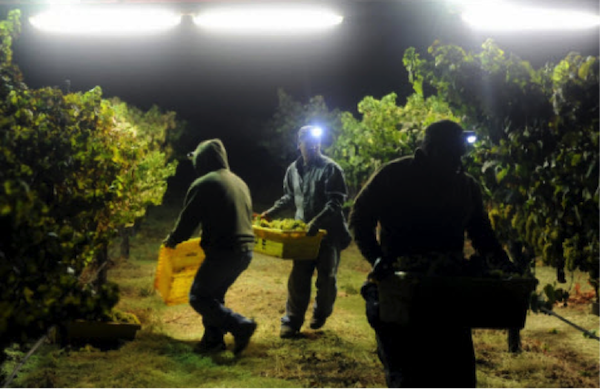 After maceration, the wine must is inoculated with a commercial yeast (BDX) developed in France that minimizes the heat generated during fermentation, retains the color of the wine, and enhances flavors and aromas. Modern commercial yeasts have enzymes to improve color stabilization and to promote the development of pleasing aromas.  After fermentation, the juice is pressed to remove berry skins and seeds and put into French barrels for 23 months.  We used 60% new barrels (Sylvain and Vicard) and 40% once-used barrels (Hermitage) for the 2014 vintage. Together these barrels impart oak flavored tannins combined with fruit tannins (skin and seeds) to produce a wine with a complex finish that goes on and on.  The wine was racked four times during the aging process to introduce oxygen and remove the dead yeast cells and particulate material.

The blending components are fermented separately.  The blend was completed and bottled in early August 2016. The blend was 92% Rutherford Cabernet, 6% Merlot, and 2% Petit Verdot. The Merlot wine, which adds a fleshy, jammy fruit component, came from the Orchard Vineyard in the Oak Knoll District AVA that we use in our Greyscale Merlot product. The Petit Verdot adds a spicy spark at the very end of the wine.

The wines we produce are like your children – you love them all and try not to compare them to each other.  Jean and I were extremely proud when the first wine we released – the 2008 Greyscale Cuvée Blanc – won “Best in Class” at the 2011 San Francisco Chronicle Wine Competition, which many California winemakers believe is the most difficult competition you can enter.  Our Cabernet wines frequently receive Gold Medals at respected competitions. The 2014 vintage has been slower to integrate – Kian calls this “marrying” – and overcome the shock introduced by filtration and bottling. As happens every year, we let the wine age for at least 12 months in the bottle before release. This year we waited 2+ months longer for the wine to marry. As a result, we do not have a lot of competition results yet for this vintage. It received a Silver Medal at the San Francisco International Competition back at the beginning of the Summer 2016. We are anxiously awaiting the results in January 2018 from this year’s San Francisco Chronicle competition. In the meantime, although it is young, the wine is drinking very well. We hope you enjoy it.

Why did you name the winery Greyscale Wines?

The Greyscale Wines name came from an observation Jean made that, “Wine is neither black nor white. It’s always shades of grey.” This phrase captures our philosophy of winemaking – it is not a scientific formula. Each year we adjust to weather, fruit quality, winemaking opportunities, and blending components to produce the very best wine possible.

TAGS: Greyscale WinesNapa Valleyvineyardswinemaking
Previous Blog Posts
2014 Inspiration Vineyards Harvest Report
2017 Napa Vintage Update | Winemaker Keith Webster
5 Wine Tasting Party Ideas
5 Women Owned Wineries and Female Winemakers To Support Right Now on Cellar Angels
9 Things That Must Be Listed On Wine Labels, According To Law
We use cookies on our website to give you the most relevant experience by remembering your preferences and repeat visits. By clicking “Accept”, you consent to the use of ALL the cookies.
Do not sell my personal information.
Cookie SettingsAccept
Manage consent
Privacy Overview:
This website uses cookies to improve your experience while you navigate through the website. Out of these, the cookies that are categorized as necessary are stored on your browser as they are essential for the working of basic functionalities of the website. We also use third-party cookies that help us analyze and understand how you use this website. These cookies will be stored in your browser only with your consent. You also have the option to opt-out of these cookies. But opting out of some of these cookies may affect your browsing experience.
Necessary Always Enabled
Necessary cookies are absolutely essential for the website to function properly. These cookies ensure basic functionalities and security features of the website, anonymously.
Functional
Functional cookies help to perform certain functionalities like sharing the content of the website on social media platforms, collect feedbacks, and other third-party features.
Performance
Performance cookies are used to understand and analyze the key performance indexes of the website which helps in delivering a better user experience for the visitors.
Analytics
Analytical cookies are used to understand how visitors interact with the website. These cookies help provide information on metrics the number of visitors, bounce rate, traffic source, etc.
Advertisement
Advertisement cookies are used to provide visitors with relevant ads and marketing campaigns. These cookies track visitors across websites and collect information to provide customized ads.
Others
Other uncategorized cookies are those that are being analyzed and have not been classified into a category as yet.
SAVE & ACCEPT
Powered by