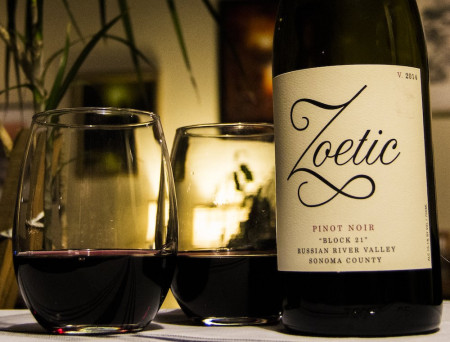 While getting my masters in writing a few years back, I landed a fortuitous job as a tasting room manager at an urban winery collective in San Francisco’s historic Dogpatch neighborhood. (I say fortuitous because what graduate student wouldn’t seize the opportunity to make money and have the means to drink exceptionally good wine?)

Tucked away on an eclectic block of bars and restaurants, converted and dilapidated warehouses, and a bevy of underground artisans is where I met the winemaker of Zoetic Wines, Kim Vance. Raised in Texas with a background in finance, Kim’s reinvention into winemaking started with her first harvest internship in 2008 in northern California. With a little intuition and a giant leap of faith, Kim and her husband, David, subsequently relocated to Northern California to co-found Zoetic Wines in 2012.

It was around that time that my lifelong love affair with wine was also taking hold, as I began to uncover more fortuitous aspects to being a part-time wine novice. There was, of course, the educational value gained by spending time in a full-production winery, where on any given day, the warehouse would be buzzing with commercial winemakers and private clients tinkering with barrels and glass beakers. There was also the benefit of meeting new people outside of the bubble of graduate school, from winemakers and tasting room patrons to event purveyors and local merchants. And last but not least, there was the steady, subtle growth in my palate, my knowledge, and my appreciation for small-batch, artisanal wines. After all, the best way to learn about wine is by drinking it, right?

It wasn’t long before my taste evolved from, “I love anything red” to “I prefer Pinot Noir, namely from the Russian River, especially when it’s aged in 100% French oak. It can’t hurt to have aromas of vanilla and spice. Oh, and I really like a Pinot with a velvety, full-bodied finish, you know, that sort of thing.” It was only natural I would fall in love with Zoetic Wines, and more specifically, with Kim and David’s knack for achieving greatness in every vintage, barrel, and bottle of their handcrafted selection of Pinot Noirs.

A few years and countless bottles of wine later, I’ve since moved on to pursue other goals as a writer. But in that passage of time, I’ve come to regard Zoetic Wines as my tasting muse, which makes it hard not to miss those days when sampling their award-winning wines was more the norm. So, when Kim recently reached out to gauge my interest in writing about the special offering of the 2014 “Block 21” Russian River Valley Pinot Noir with Cellar Angels, I could hardly contain my excitement.

In one gentle whiff of the nose, the Russian River Pinot transported me back in time, as if this particular bottle had the power to release all the memories, experiences, and people who shaped my fundamental love of wine. Using 100% Pommard clone from vineyard block 21, and aged in 100% new French oak for 11 months, this unique vintage of Pinot Noir perfectly demonstrates Kim’s mastermind in the art and science behind winemaking. I was instantly captivated by it’s bright, yet translucent garnet color, followed by aromas of dark cherry, plum, cranberry, and a subtle earthiness. My adoration only grew with the palate of delicate yet prominent acidity, medium tannins, spicy notes, and full-bodied finish. Complex enough to stand alone, yet versatile for pairing with a generous variety of foods, this wine represents a truly distinct vintage.

As icing on the cake so-to-speak, Zoetic Wines has partnered with Cellar Angels, an organization that donates a portion of the proceeds to a philanthropic cause of your choosing. The joint promotion kicked off on March 6th and will run for the next four weeks.

With only one barrel of Zoetic Wines 2014 “Block 21” Pinot Noir ever produced, this is your ultimate chance to drink in the authentic journey from grape to glass.

A note from the Angels: Buy the 2014 “Block 21” Pinot Noir here and select your favorite charity to support with proceeds from every purchase!

TAGS: sonomaZoetic Wines
Previous Blog Posts
2014 Inspiration Vineyards Harvest Report
2017 Napa Vintage Update | Winemaker Keith Webster
5 Stories of Latino Vintners in Napa Valley | Hispanic Heritage Month
5 Wine Tasting Party Ideas
5 Women Owned Wineries and Female Winemakers To Support Right Now on Cellar Angels
We use cookies on our website to give you the most relevant experience by remembering your preferences and repeat visits. By clicking “Accept”, you consent to the use of ALL the cookies.
Do not sell my personal information.
Cookie SettingsAccept
Manage consent
Privacy Overview:
This website uses cookies to improve your experience while you navigate through the website. Out of these, the cookies that are categorized as necessary are stored on your browser as they are essential for the working of basic functionalities of the website. We also use third-party cookies that help us analyze and understand how you use this website. These cookies will be stored in your browser only with your consent. You also have the option to opt-out of these cookies. But opting out of some of these cookies may affect your browsing experience.
Necessary Always Enabled
Necessary cookies are absolutely essential for the website to function properly. These cookies ensure basic functionalities and security features of the website, anonymously.
Functional
Functional cookies help to perform certain functionalities like sharing the content of the website on social media platforms, collect feedbacks, and other third-party features.
Performance
Performance cookies are used to understand and analyze the key performance indexes of the website which helps in delivering a better user experience for the visitors.
Analytics
Analytical cookies are used to understand how visitors interact with the website. These cookies help provide information on metrics the number of visitors, bounce rate, traffic source, etc.
Advertisement
Advertisement cookies are used to provide visitors with relevant ads and marketing campaigns. These cookies track visitors across websites and collect information to provide customized ads.
Others
Other uncategorized cookies are those that are being analyzed and have not been classified into a category as yet.
SAVE & ACCEPT
Powered by