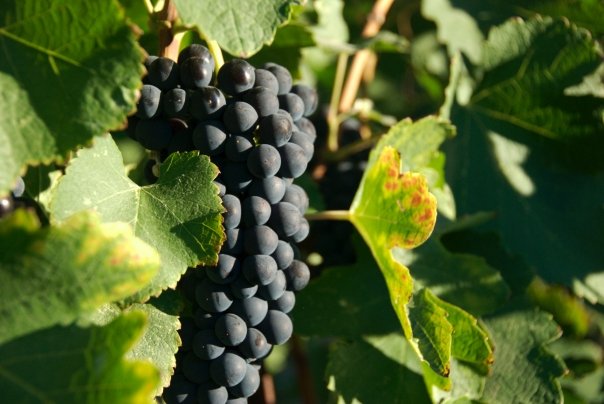 Syrah, as it is called in most wine-producing countries, and Shiraz in Australia, is a dark-skinned red wine grape that is widely grown throughout the world. This grape is one of the most significant emerging varietals and plays an important role in many wine areas, and in some cases, being showcased as a particular country’s source of distinction. This grape has a long documented history in the Rhône Valley region of mid-central and southeastern France. In the late 1990s, DNA profiling found Syrah to be the offspring of two obscure grapes from southeastern France, Dureza and Mondeuse Blanche. Since both of Syrah’s parents derive from such a limited and confined area very close to northern Rhône, researchers have concluded that Syrah originated from northern Rhône and not from Persia in the Middle East, as many had speculated. Syrah is often confused with a similar-sounding grape—Petite Sirah (sometimes referred to as Durif) that is a completely different varietal, yet shares some connection. Petite Sirah is actually a cross of Syrah with an obscure varietal named Peloursin. Syrah or Shiraz is often created as a stand-alone varietal but is also incredibly adaptable to being blended with other compatible grapes such as Grenache, Mourvèdre, Cabernet Sauvignon, and Viognier. As a solo or dominated varietal, Syrah is the principal style of Hermitage in northern Rhône, California’s Central Coast, or Australia. When Syrah is blended with a small amount of the white wine varietal Viognier, this traditional style is associated with the appellation of Côte-Rôtie in northern Rhône. In Australia, Shiraz can also be found as a blending component with the compatible Cabernet Sauvignon. This blended concept originated in Australia where it’s often identified with both varietals on the front label as Shiraz-Cabernet. Syrah may also act as a minor blending partner for Grenache and Mourvèdre as the traditional style of Châteauneuf-du-Pape of southern Rhône. Elsewhere in the New World, this blend is occasionally identified by the grapes’ initials as “GSM,” referencing the trio of Grenache, Syrah, and Mourvèdre. For the purpose of simplification, there appear to be two distinct styles of this grape: Syrah (and Syrah blends) and Shiraz. Syrah tends more toward a spicy, rustic, or earthy style that can be medium to full body with medium acids and medium to high tannins. Shiraz, on the other hand, is created in a bolder style that is intensely Fruit-forward and high in alcohol due to extended hang-time. Therefore, this wine is geared for lovers of robust, full-bodied wines with intense concentration and mouthfeel.

Syrah/Shiraz ranges from fairly to highly aromatic. Aroma and flavor aspects can include a range of floral (violets) to baked and dried black fruit (blackberry and blueberry), bakeshop (chocolate, espresso, clove, and black pepper), tobacco shop (leather), and earth (leaves and animal). As with most wines, over time, many of the “primary fruit” components are moderated and then supplemented with earthy or savory “tertiary” notes with a greater emphasis of tobacco and earth.

Syrah/Shiraz tends to be densely colored, with a rich, medium to full body, medium to high tannin and acid, with high alcohol content. Syrah blends tend to be a bit softer than the solo Syrah, and with less alcohol.

Syrah continues to be the dominant red-wine grape of France’s northern Rhone. It’s associated with the famous appellations of Hermitage, Côte Rôtie, St. Joseph, and Crozes-Hermitage. In the southern Rhône, Grenache plays the dominant role while Syrah is used as the compatible blending partner in such wines as Châteauneuf-du-Pape, Gigondas, and Côtes-du-Rhône. In the New World, Syrah plays significant role in the wines of California (Central Coast), Washington State (Columbia Valley), Australia (Barossa Valley and Coonawarra), Chile (Colchagua and Maipó), and South Africa (Cape).